“You can’t fight the future.  Trust me, it’s bigger and it’s stronger and despite the fact that it doesn’t even exist yet, it has more cunning in next week than a hapless mortal has in 18 years of experience.”  In other words, Destiny Cuts. 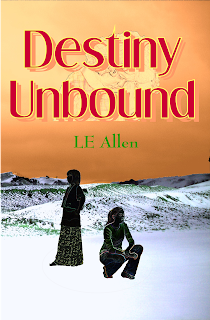 The first daughter inherits.  The second daughter hangs around waiting for the first one to succeed or die trying.  The third daughter goes out and has adventures.  So what does a fourth daughter do?  Pretty much whatever she wants, as long as she leaves home to do it.

THE STORY
Sora wants a quiet life, doing an honest days work for an honest day’s pay someplace far from her home.  Instead, she becomes mixed up in adventures through no fault of her own.  She saves the world, sort of.  She picks up a warrior, a healer, a bard and a priestess.  Oh yes, and an enchanted sword.  Gosh, isn’t she lucky?

THE SETTING
Ainland, a country that covers most of what we know as northwestern Europe, has it’s roots in the fall of Troy.   It’s a longish short story (also called novella) that involves some very angry goddesses and most of the Celtic population.  The rest, as they say, is alternate history.

THE REASON YOU SHOULD BUY  DESTINY UNBOUND
Both my mother AND my mother-in-law liked it.

WHERE YOU CAN BUY DESTINY UNBOUND